(CNN) A Chinese college student who made no threats but had alarmed a roommate and a friend with his behavior and bought two semiautomatic rifles will be deported for an unrelated visa issue, University of Central Florida police said Thursday.

Police at the Orlando school said they were first alerted by a campus official in late January that Wenliang Sun, 26, was a “student of concern,” UCF police Chief Richard Beary said. 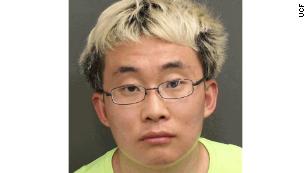 Campus police received information that Sun had altered his appearance and his behavior was changing, the chief said. They contacted the Bureau of Alcohol, Tobacco, Firearms and Explosives and were told Sun owned an AR-15-style rifle and ammunition.
“We know that in today’s world that a person in distress who owns a high-powered firearm, we just cannot ignore that,” Beary said. “We have a duty and an obligation to make sure our people are safe.”
There was “red flag after red flag,” that something bad would happen, he added.
Those red flags, the chief said, included Sun being uncommunicative with others and not leaving his room, dying his hair blond, paying for a fast expensive car with cash, and referring to one of his guns as a “sniper rifle.”
Beary said Sun also went to a gun range to practice with his rifle and also wouldn’t return calls from authorities when they tried to notify him his immigration status was subject to change.
But the chief acknowledged there were no comments in interviews or in reviews of his electronic devices that Sun was planning to harm anyone.
“That’s the interesting thing in this case, there were no specific threats. Reiterating that, there were no threats,” Beary said.
The chief said the red flags looked at separately might not mean much but when all of them were considered collectively they were concerning.
“I think there was a disaster about to happen and we stopped it,” the chief said.